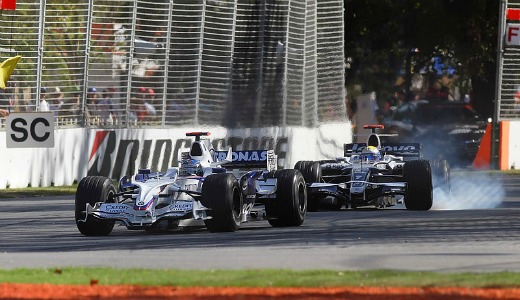 The Formula One World Championship is regarded as the most popular type of single-seat automobile racing in the world. Sanctioned by the Fédération Internationale de l’Automobile (FIA), it features groups of races known as Grands Prix, all of which are held on circuits and public roads.

While Formula One racing is predominantly held in Europe and parts of Asia, the high-octane sport recently came to downtown Austin, Texas.

2014 marks the third year in which Austin played host to the the U.S. Formula One Grand Prix. Sebastian Vettel and Daniel Ricciardo of team Infinity barreled through the city’s Congress Avenue in front of tens of thousands of spectators.

The duo then proceeded to showboat the 2011 Championship RB7 F1 and Infinity Q50 Eau Rouge (prototype) by doing donuts on the closed course.

But it was Lewis Hamilton who won the main event in Austin, passing his teammate Nico Rosberg on Austin’s streets. This win gave Hamilton a 24-point lead in the rankings, but there are still plenty of Grand Prix races left in the season. Both Hamilton and Rosberg drive for team Mercedes.

So, what kind of impact did the race have on Austin? According to a report published by Bloomberg, this year’s F1 race generated well over half a billion dollars in revenue for the city and surrounding area.

Scoring a ticket to see the Formula One racing event isn’t cheap. While there are tons of events and activities to do in addition to watching the race, a general admission ticket starts at $300. However, fans of the sport say it’s well worth the price.

“Austin’s such a great city, and we worked with them really, really closely,” said Allyson Witherspoon, lead director of marketing communications for Infinity. “My team came to me and they were like, ‘Here’s what we want to do: we want to shut down the streets of Austin and race the cars in the middle of the city.’ I was like, ‘That is awesome. Go make that happen.’ So we did, working really closely with the city to figure out: How can people have the F1 experience without having to go to the race?”

Formula One racing is expected to return to Austin, Texas in 2015.

Our team of moving professionals specialize in making your move as easy and stress-free as possible and we would love to help with your next move.  Get a free online moving quote today.


Comments Off on Infinity Formula One Barrels Through Downtown Austin